Zimbabwe is a landlocked country situated in Southern Africa. It is bordered by Botswana, South Africa, Mozambique and Zambia. It covers an area of some 390,580 square kilometers. 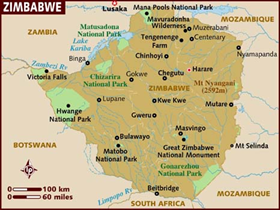 Summer rains dominate the seasons, usually lasting from November through to April, and bring relief after months of drought. Daytime temperatures can range from 25° to the high 30s, even 40s in low lying areas. Night-time temperatures drop to 15-20 °C.

Zimbabwe has a centralised government and is divided into eight provinces and two cities with provincial status, for administrative purposes. Each province has a provincial capital from where official business is usually carried out.

Population figures in the table below refer to the census of 18 August 2002.